Because of the range of tasks it performs, Eli Tables will compete against two basic
categories of alternative products, with widely varying prices and capabilities.
(Appendix 2 contains urls for all the products cited below)
At one end of the price spectrum are folding saw horses and saw horse brackets.
This segment is dominated by Fulton, Trojan and the Crawford and Storehorse
divisions of the Lehigh Group. Crawford's products include saw horse brackets, legs
and folding metal sawhorses. This segment also includes folding plastic sawhorses
from Stanley and other manufacturers
The other end of the price spectrum in this category is dominated by the Black &
Decker WorkMate® and devices of the same design by Stanley, Craftsman, Wilmar
and the German firm Wolfcraft. A very recent entry in this category is the Jawhorse®
from Rockwell.
The tool-stand segment of the competition is dominated by much smaller
enterprises, Most notably Rousseau, Sawtooth Specialty Tools, HTC Products and
Lee Unlimited.
Fulton and Trojan, primarily sawhorse manufacturers, also have entries in this
segment.
Competitor’s Strengths
The competition is formidable. Many are nationally known brands. The rest are well
respected names in the trade(s) they serve.
The competing products they provide are familiar and have commonly known uses.
Competitor’s Weakness
The price/performance characteristics of their products vs. Eli Tables.

Association memberships is one rough gauge of the number of purchasing decision
makers for this product among the Professional Residential and Commercial
Construction/Maintenance/Renovation segment.
The combined membership of the largest five associations is 274,616.
They are:
- American Subcontractors Association (ASA) Members: 5500.
- Associated Builders and Contractors (ABC) Members: 19000.
- Associated General Contractors of America (AGC) Members: 34416.
- National Association of Home Builders (NAHB) Members: 208000.
- National Association of the Remodeling Industry (NARI) Members:
7000.
- National Frame Builders Association (NFBA) Members: 700.
There are more than 150 publications dedicated to this industry.
There is highly suggestive evidence that the worldwide demand, for a product of
this type, is quite strong.
- Between its introduction in 1968 and 1981 over 10 million Black &
Decker Workmates® were sold worldwide.
- B&D currently sells four different versions of the Workmate®
- There are four other brands of virtually identical products.
- A fifth manufacturer, Rockwell, has recently entered this market with
a similar design (a vise on a stand) of similar capabilities.
- The top three US portable saw horse manufacturers (Trojan, Fulton
and Crawford) regularly report sales of $9M - $11M annually
(combined)
It is difficult to get a precise handle on the market size in dollars. Eli Tables fit in
NAICS 3332103396 ("Parts, attachments, and accessories for woodworking
machinery sold separately excluding saw blades and cutting tools"), but products of
this type only account for 35% - 40% of the entire category.
The worldwide demand, for this NAICS category as a whole, is estimated at $4.6B,
over the next five years* . [$4.6B x 35%/40% = $1.6B - $1.8B]
Accordingly, over the next five years* a 10% market share would be approximately
$170M
This worldwide demand is not evenly distributed.
Asia accounts for about 35%,
Africa Europe and the Middle East about 33%,
North America and the Carribean about 23%,
Latin America 7% and Oceania 1%
The modularity of the design also opens up a second revenue stream in renting and leasing parts on an as-needed basis.

Target Market
‘ Professional Residential and Commercial
Construction/Maintenance/Renovation Providers
‘ Homeowners, Owner-Operators and Do-it-Yourselfers
‘ Multi-Use and Reconfigurable Manufacturing Facilities
Marketing Mix Strategy
The overall marketing strategy is informed by Malcolm Gladwell’s “The Tipping
Point”. The basic objective is to get Eli Table sets into the hands of influential early
adopters.
One such group are the professional Theatrical and Event Services providers,
among whom I have many contacts. Another group are the community based home
construction/renovation non-profits.
No effort should be spared to get favorable exposure on the D-I-Y programs on PBS
and in the trade media.
Separate, but coordinated marketing efforts to governmental agencies and large
contractors should also be undertaken
Another marketing objective is ready availability. In the North American region e.g.
Eli Tables should be available both in the big-box stores and via the major online
merchants.

Promotions
Because Eli Tables represent a paradigm shift, a new way of doing things, serious
promotion will be required.
One such might be a demonstration tour through the big-box store locations.
Another might by organizing “Guiness Book” events. There is no theoretical limit to
the size of an Eli Table. Getting a large group of owners together to create one.the
size of a Home Depot parking lot; would make that point very vividly and attract
press attention.
A key conceptual component of Eli Tables is their use as a platform for user built jigs
and fixtures. Design competitions and/or prizes for interesting applications and an
Internet accessible knowledge base “Tips & Tricks” would also be useful. It is
probably no longer possible to have a product which does not have (in addition to a
website) a presence on thee social networks.

Minimum Table
Because Eli Tables are more capable than their
competitors, and are a kit rather than a thing, it
is difficult to make an apples to apples price
comparison.
It require 2 pairs (4) folding saw horses ($100-
$150.) to approximate the capability of a
minimal Eli Table (right); which should be priced
at the high end of that range. 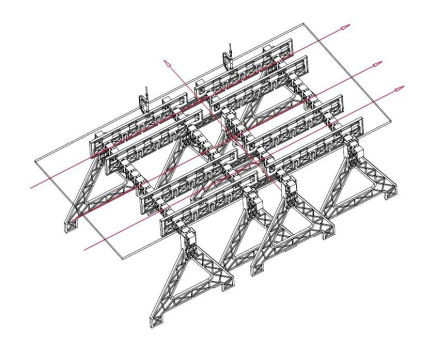 The kit for this Eli Table
(left) should price in the
middle of that range.

Even once you reach kits of
this size and complexity, the
total kit cost should still not
exceed 60% of the combined
cost of a comparably capable
collection of stands and
horses/work supports - (as
much as $600-$800)

Use of Loan Money
Taking a loan to finance the start of Eli Tables itself is not contemplated. At this stage the project is too speculative.
Financing the considerable start-up costs involved in
production/marketing/distribution is a determination the
partnering/licensing/purchasing firm will need to make.
Start-Up Costs
Production Start-Up costs are considerable, in the range of $1M-$3M. Tooling is
very expensive. Over the life of the tooling it represents only fractions of a penny  per part, but it
is a large sum up front.
Research and Development will be necessary to transform this patent into a product.
This research is likely to cost between $30K-$60K in materials, computer time,
human resources etc.
It must resolve:
- Exactly what mix of polymeric material will yield the desired performance for
the least material cost.
- How far can the interstitial portions of each part be reduced without affecting
performance (for reason above)
- Which, of several competing production processes, is the best fit.
And answer the question:
- Does this iteration fall within the price constraints outlined above
Only then can a rational decision be made about whether to venture the much more
considerable production start-up costs.