The 3,4,5 Right Triangle
You would think from all my pontificating about accuracy and precision; that I never use a steel tape.
Not so. A good quality steel tape is the most precise square; you can carry in your tool pouch; that doesn't require batteries (not included) or come with the warning “Do not gaze into laser aperture with remaining eye.”

The quickest and most accurate way to check if a rectangle is “square” (four “true” right angles) is to compare the diagonal measurements. If they agree exactly – “square.” Not exactly -”out of square”. A typical carpenter's steel tape is calibrated in 1/16” increments; meaning that you can discern this agreement to within 1/32” of an inch (exactly between the 1/16” hash-marks.) For a 2' x 3' rectangle each 1/32nd inch of disagreement represents a difference of .065 of one degree from 90. The longer the limbs; the longer the diagonal. The longer the diagonal; the smaller the divisions of the angle it can parse.

Pythagoras discovered that, of all the triangles which contain a right (90 deg.) angle; the ones where one limb was exactly three units and the other exactly four units had a diagonal of exactly five units; a nice easy to remember group. This fact coupled with the principle outlined above puts an extremely precise tool for laying out a right angle or perpendicular (in your pouch), particularly over distances greater than 5' where the tolerance of a regular square becomes iffy.

In my work 4d finish nails were always my most faithful assistants. One always begins with a straight line; for which a chalk-box (or chalk-line) is the most portable and precise. Centered on the thickness of this line, where I wished to erect my perpendicular, I would drive one of my assistants leaving the head a scant 3/8” proud. From there, along the line, I would measure three units and drive a 2nd nail; same centered, the same proud. From the first nail, using my tape, I would strike an arc with a radius of four units where my eye guesstimated the sought after point might be found. Then from the 2nd nail I would strike an arc of five units. If my eye was good, that day, the arcs weren't too large and most importantly they crossed one another. A chalk line from the first nail through that intersection is a very precise perpendicular. That done, very very important to send the assistants out for recycling; so they don't bite you.
You can also do this with two tapes but the “especial point” lies beneath the centers of the two tapes where it is hard to see and mark.
To strike the distances as arcs, lock the tape about 2” long of your measure; and, grasping the tape between your thumb (held on the mark) and your folded forefinger, (the tape case held against the palm with the other three fingers); place the pencil against your thumb at the mark and while pulling the tape taut against the assistant, let the tape guide your arc strike. 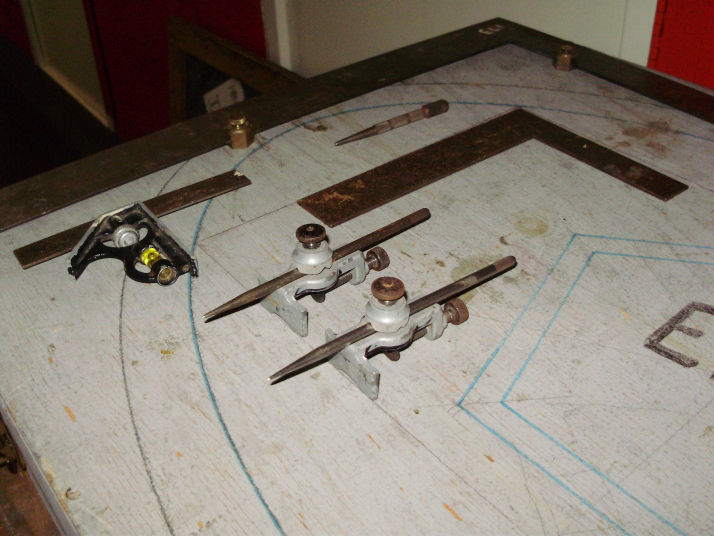